In order to improve the look and performance of the dictionary, considerable effort was spent in the late 80s and early 90s on developing a new interface program in FoxPro for Windows. This mouse-and-menu-driven program permitted a user to find words in the corpus according to various criteria of etymology, shape, or meaning, to see what words it is cognate with in its immediate sub-family e. It was also possible for a user to formulate new cognate sets and add them to the data-base on a permanent or temporary basis, to edit database entries, to add new entries, and to incorporate upgrades.

From about two serious shortcomings in the Cushitic Lexicon approach became apparent. One was that the database programs and data formats were becoming obsolete. Another, more important, one was that programming and interface design were becoming white elephants. These also threatened to become even more of a burden as the Project, as a whole, began to look outward, beyond Cushitic and Omotic, toward the more general Afroasiatic language superfamily. 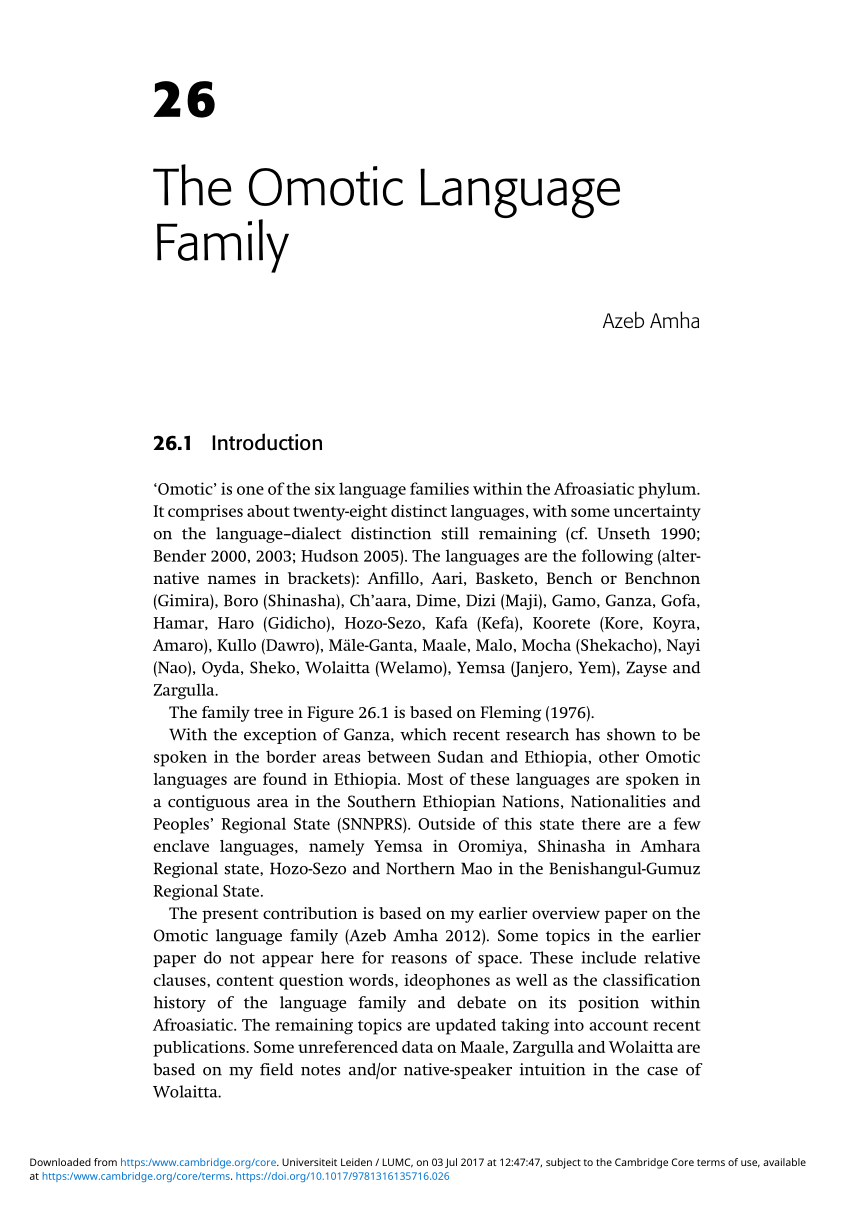 Fortunately, just when the project threatened to stall, a new approach to interface design emerged, based on HTML and the World-Wide Web. On the one hand, HTML offered a simple language for designing interfaces. On the other hand, the World-Wide Web provided a way of making those interfaces available to the public at large. After a short period of experimentation and study in early , development exploded.

Then a prototype Web interface was developed for etymological work on Semitic languages. An initial attempt was also made at translating the older Cushitic Lexicon data into a format suitable for use on the Web. It was during this period that the project, which had moved well outside the Cushitic-Omotic realm, was re-named the Afroasiatic Index Project. At present we hope to make once more available a prototype Semitic Index giving etymological relations within Semitic, but not yet to any branches of Afroasiatic outside Semitic, and follow up with a Cushitic Index Since, as indicated, the Cushitic index already notes cognates in other branches, a rudimentary, Cushitic-oriented Egyptian, Berber and Chadic index will begin to take shape by default.

It is our hope that linking to or embedding from data provided by competent outside sources will provide more adequate coverage in these areas.

In addition to the lexical and grammatical information provided by these modules of the project, we plan to include sample text browsing capabilities. A preview of these text-browsing capabilities can be seen in the approach developed in a sister site the Achaemenid Royal Inscriptions project. Etymology is the study of word histories.

Congrats on passing the upgrade presentation. I have absolutely no idea what it is, but it sure sounds like a good reason to celebrate :P. Ehret is mentioned in the text but is absent from the bibliography. Nitpicking aside, the author is quite right. I would add that it would be very surprising, for geographical reasons, if words of Cushitic origin were NOT found in Omotic. And from this point of view even the discovery of regular sound correspondences between Omotic and other branches of Afro-Asiatic would prove nothing: loanwords can exhibit regularity just as much as a stratum of borrowed words: as Luis Mitxelena pointed out, Basque i.

Theil clearly shows that Omotic is much less similar to the rest of AA than people used to think.

That's impressive. Strictly speaking, though, Theil has not shown that Omotic is not AA. This would require showing that either Omotic or the rest of AA is more closely related to something else than to the previously supposed partner, and he hasn't done that. Incidentally, many of the IE comparisons clearly don't work e.


One thing is obvious, though: a rigorous reconstruction of Proto -Rest -AA would be very, very helpful, because this is what Proto-Omotic assuming anyone has made that reconstruction needs to be compared to. The claim that personal pronouns tend to look alike all over the globe sounds dubious to me. In Wetzels , Leo ed. Utrecht : LOT. Compound verbs and ideophones in Wolaitta revisited. Cambridge University Press. In Frajzyngier , Zygmunt and Shay , Erin eds.

In Hayward , R. London : School of Oriental and African Studies.

Comrie , Bernard. Language universals and linguistic typology. University of Chicago Press. Goshu , Debela and Demeke , Girma A. A grammatical sketch and some socio-linguistic aspects of a dying language, Anfillo. Dimmendaal , Gerrit. In Heine , Bernd and Nurse , Derek eds. Dixon , R. Where have all the adjectives gone?

And other essays in semantics and syntax. Berlin and New York : Mouton.